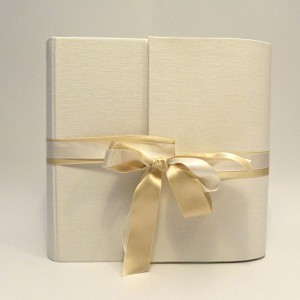 A traditional album is the classic photo album on which are pasted photographs, following a narrative sequence carefully chosen by the couple. The photos are printed on photographic paper, matte or glossy, photo paper compared to digital has always an elegant effect, the reflection of light on photography arouses emotions that other types of prints can not convey.

Over the years they have changed the materials used for coating traditional albums, were once mainly leather, modern trends are to customize the colors using canvases or papers with shades that reflect the colors of the wedding, to reinterpret in a modern way current and timeless style that characterizes it.

It once held 50/60 images, size 20 × 30 cm, in recent years the number of images has grown, alongside the classic large format photographs, now traditional album you add all those contour shots that complement the story of the day: the details of the preparations, the hugs, photos of groups of friends, the fun, the excitement of the guests.

The traditional album is made entirely by hand on sheets of paper that is large enough and with various color tones. From ivory to black. Between one sheet and the other are inserted semitransparent sheets of tissue that have the purpose of keeping the divided picture, so do not get damaged, the card currently being used for printing the photo is not subject to aging and yellowing as happened once, the photos do not stick together if they are in contact, can happen only if the traditional album is kept in humid environments. The tissue can be of two types, the traditional, most end, the gsk slightly more consistent with satin effect.

The traditional album is synonymous the tradition of the classic photograph printed on photographic paper, elegant and timeless, the pleasure of the reflection of light on the photograph, the scent of the press and the emotions it stirs the unconscious memory of the past when even digital printing It did not exist.

In traditional album pictures are applied on with double-sided pages or glued with special materials, which give the possibility to change the position in the case in the future you want to replace some pictures or add new ones, unlike the digital press that does not allow changes to a when printed.

The choice of the size of the album, horizontal, square or vertical depends on the selected photos. If most of the pictures will be vertical, the best choice is a vertical albums, vice versa for the horizontal. The square lends a little 'for both uses. The formats available on the market for traditional albums ranging from the smallest 20x15 to 45x45, with the number of pages varies from 30 to 70 pages, corresponding to twice the available facades.